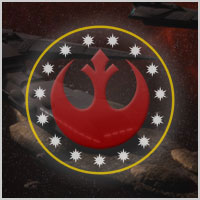 The New Republic was the direct successor to the Rebel Alliance, officially the Alliance to Restore the Republic, a loosely aligned group of rebel factions united by a common desire to remove Emperor Palpatine and his Empire from power and restore liberty to the galaxy.

Originally founded by three former Senators of the Old Republic, Garm Bel Iblis of Corellia, Mon Mothma of Chandrila, and Bail Organa of Alderaan, the Rebel Alliance quickly grew to encompass thousands of highly motivated resistance cells across the galaxy willing and able to take the fight to the Empire.

Led by Mon Mothma and Admiral Ackbar, the Alliance used its limited military resources to undertake a strategy of space denial against the Empire, performing hit and run raids against Imperial shipping to disrupt the enemy and gather resources for more substantial engagements.

Faced with the dire threat posed by Moff Tarkin’s Doctrine of Fear, embodied by the massive Death Star and its role in the destruction of Alderaan, the Alliance stepped up its activity against the Empire, culminating in a desperate and daring attack on the still unfinished second Death Star.

With the Emperor dead at Endor and the Imperial Fleet in disarray the Rebel Alliance, in accordance with its founding treaty, convened a Constitutional Convention to determine the form of a restored Galactic Republic.

The convention eventually established a New Republic Provisional Council charged with writing a new constitution and founding a new Senate based on the same premise as the Old Republic, to have a representative parliamentary body govern the galaxy in a fair and equal manner.

*Campaigns with (M) are also available in multiplayer.